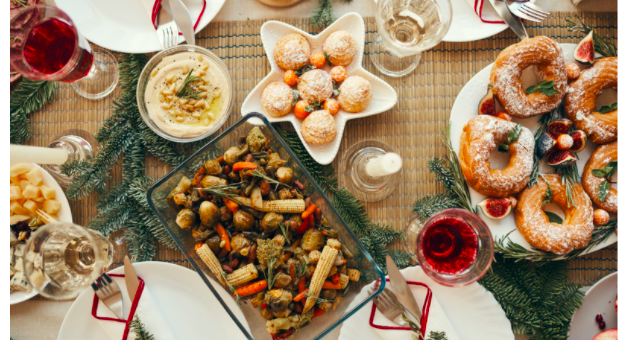 If there’s one thing we all love about celebrations and festivities, it’s the food. Our bodies may not thank us for it after the fact, but we’d argue that during the festive season, the food is equally as important as the gifts and almost as important as the shared time with loved ones.

We thought we’d take a break from in-depth food talk to have a light-hearted look at festive plant-based food traditions around the world.

Here in South Africa, where Aruna Foods is based, we generally have a big lunch, usually your traditional Sunday roast with some extra trimmings. Some people also opt to braai (BBQ) as our Christmas is in the summer sunshine. Obviously, many people cook meat, but if you’re looking for vegan BBQ ideas, we’ve got you covered. Check out our blog on mastering a vegan BBQ fit for a celebration. 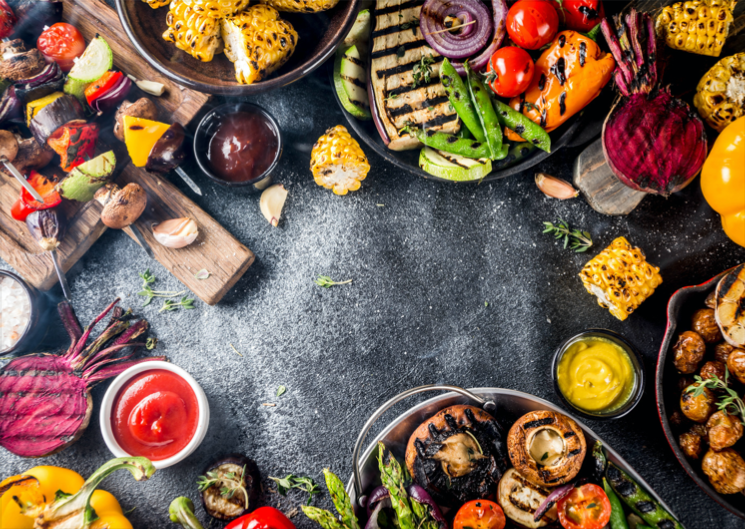 So, let’s take a look at some other countries’ yuletide food traditions

Italy has many traditions around festive food, but one of the most well-known and vegetarian-friendly is the Panettone. This is a massive airy cake filled with candied fruit, chocolate, raisins or nuts. You don’t cut it. You rip pieces off and shovel them into your mouth. Yum! 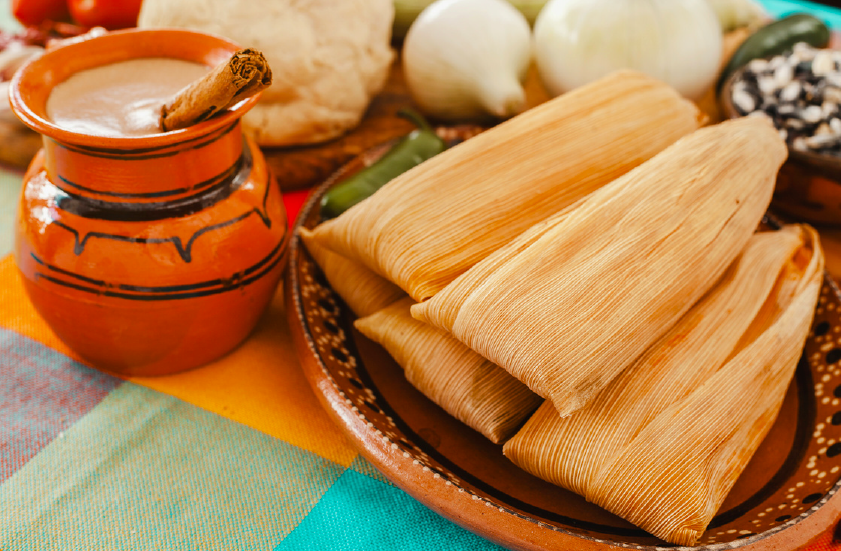 In Colombia, tamales are the talk around the tinsel. These are little pockets made of cornmeal and cooked in banana leaves or corn husks. They are soft and succulent and can be filled with pork, chicken or beef, but can also be vegetarian. The Colombians wash this down with a homemade eggnog called rompope.

Here’s a great recipe for rompope (vegetarian, not vegan). 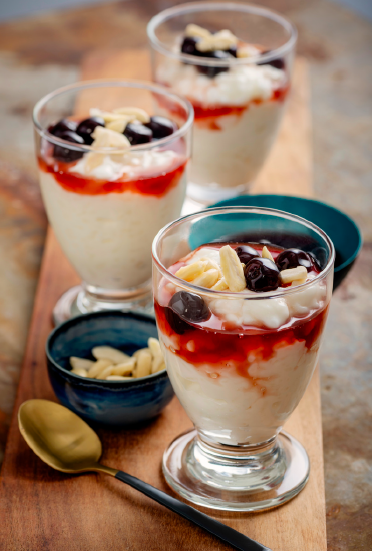 The Danish have a scrumptious, hearty festive food that would just hit the spot on a cold wintry day. Rice pudding. They call it ris á la mande (the cold version) or risengrød (the warm version) and it’s a creamy concoction of cooked rice with whipped cream, vanilla, almonds and hot cherry sauce. They hide a whole almond inside and if you happen to get it, you get a gift. 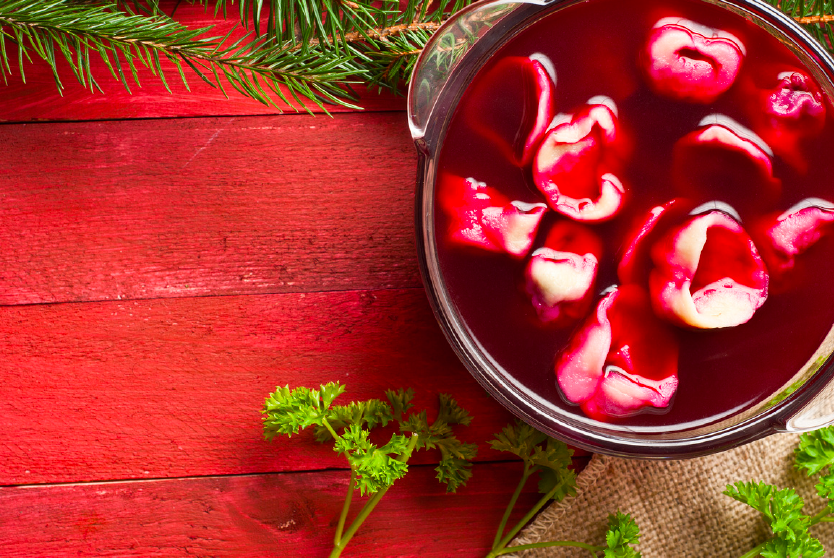 There are many traditions in Poland over Christmas including a 12-course feast on Christmas eve called Wigilia. One of our favourite courses of this feast is the red Borscht (beetroot soup with dumplings). The name alone feels hearty and wholesome. 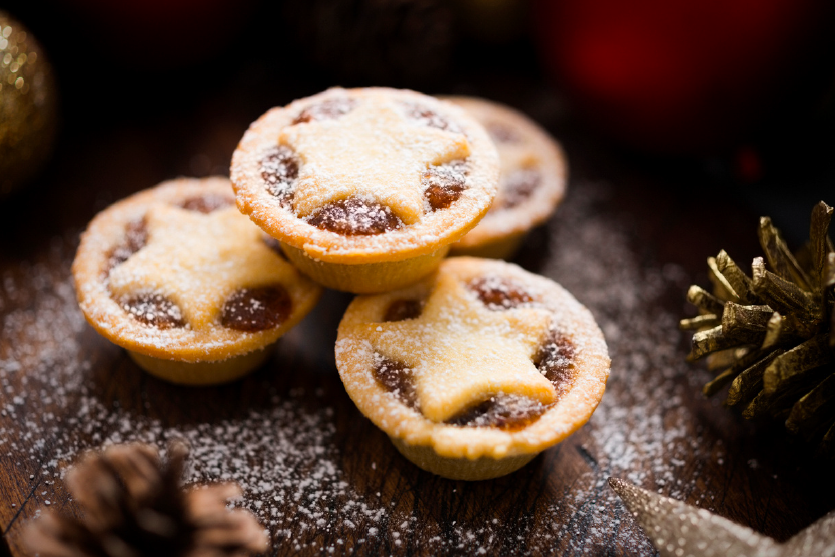 We all know England loves a good roast dinner, but the Christmas treat we love most is the humble mince pie. Legend has that when the 13th C knights returned from the Crusades, they brought with them new spices, such as cloves, nutmeg and cinnamon. These were added to minced fruit to make a perfectly palatable pie.

It was thought that eating a mince pie every day for the 12 days of Christmas would bring you 12 months of good fortune. What a great excuse to eat pies every day! 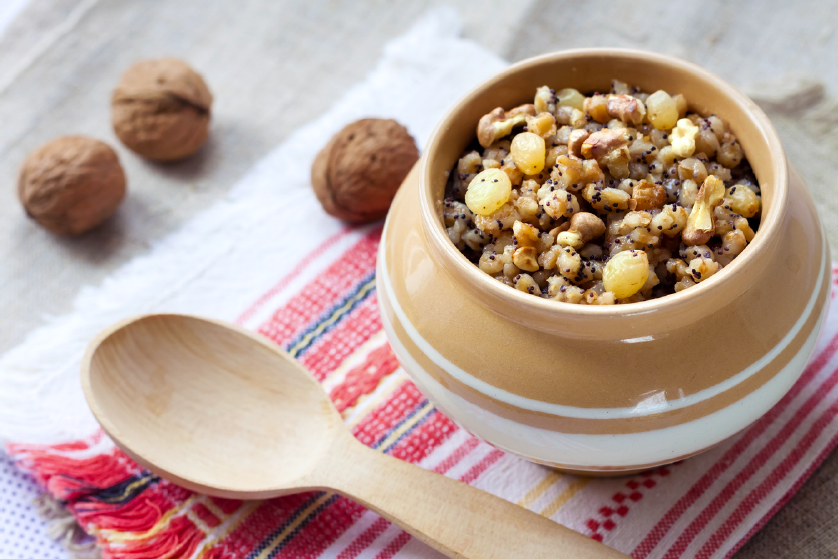 This is a chilly part of the world over the festive season, so it’s no wonder that they both have a soul-warming porridge as a Christmas staple. In Ukraine, it’s called Kutya and is a wheat porridge with poppy seeds, raisins and honey. It pays tribute to a good harvest and symbolises wealth.

In Russia, it’s called Sochivo and can be wheat or rice porridge with fruit, nuts, seeds and honey. It symbolises unity. Similar to Ukraine, porridge indicates a good harvest and wealth. Only, in Russia, instead of looking back at the past year’s harvest, they throw a spoonful of it at the ceiling. If it sticks, you’re in for good luck. If not, you’re covered in porridge. 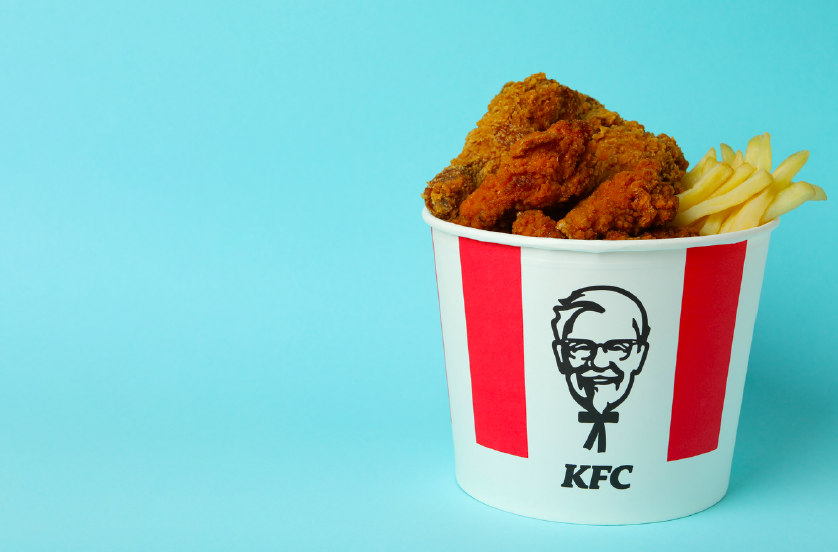 One might say Japan was scraping the barrel when they came up with their Christmas tradition – the party barrel that is. In the 1970s, KFC in Japan created a Christmas-time ‘party barrel’ reminiscent of the American roast turkey festive meal. Now, the tradition of having KFC on Christmas in Japan has become so popular that people put in their orders two months in advance.

And believe it or not, here is a great recipe for vegan ‘KFC’.

The Kiwis celebrate much like their Aussie neighbours – with either a roast dinner or a BBQ. One thing that they have vehemently claimed as their own despite many Australians trying to take credit for its creation, is the Pavlova. A tower of delicious meringues, layers of cream and berries, and topped with pomegranate seeds, it’s a perfect summer Christmas dessert (remember in the Southern Hemisphere, December is in summer;).

We wish you a very merry festive season and all the bestfor the year ahead.

If you are in the Port Elizabeth/Gqeberha area, and you want healthy and delicious vegan frozen meals or vegan prepared meals, pop into our store at 25 Westbourne Road, order online or check your local Spar in the Eastern Cape. We also offer platters for any occasion to take the pressure off you!

17 Vegan Pantry Staples You Can Buy From Your Local Supermarket

The low-down on milk alternatives

How to cook vegan Spanish tapas